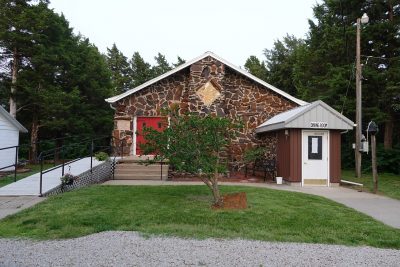 We Celebrate The Holy Bible and its Teachings

Spiritualism came first to Ottawa County, Kansas in 1873. A group of people came to Delphos, in 1876 and 1877 from a Wisconsin community (Appleton, Sherwood, Stockbridge, Lake Winnebago, Wisconsin) where Spiritualism seems to have flourished. The first meetings were held at a home. A Mrs. Heald recalls hearing her mother, Mrs. Clarence Brown, tell how glad she was to have some of the strict Quaker’s rules relaxed. Due to the lack of space in the home meeting place they continued to hold meetings on Lindsey Creek in a picnic grove. They became known as the Universal Church, which is said to be the earliest religious organization in the area at this time. The Methodist, Catholic, and Presbyterian also came to this area in the 1870’s.

In 1877 the group went to Delphos, Kansas with 13 members, which grew to 92 in a few years. The original charter was issued by the State of Kansas in 1881, to this group of Spiritualists. The first charter states, “This corporation shall be The First Association of Spiritualists of Delphos, Ottawa County, Kansas.” “The purposes for which this corporation is formed are the attainment and promulgation of knowledge, religious, scientific, and educational.” An amended charter was issued in 1891.

During these early years special trains were used to bring the people to Delphos to attend the meetings. A carnival like atmosphere prevailed outside the meetings. The members of later years felt the atmosphere of the very early beginning, caused the non-believers to think of Spiritualism in a fortune telling manner, rather than the serious religious manner in which other religions are regarded. It has been a long struggle to gain the respect and be recognized by other churches as a sincere religion. Due to the death of many and the fact many had moved away, the camp was dismantled and moved to Wells, in 1934.

As with other churches, the ladies of the Spiritualist Society had an organization. The Wells group organized December 1, 1921. In January 1925, there were 31 members; their money raising activities included quilt piecing, making aprons, and dusting caps for a bazaar at the Delphos camp. They made $26.75. They continued having ice cream socials, serving lunches at sales, giving plays and holding bazaars as money making projects. The women discontinued meeting in the fifties because of their small number but in 1963 they reorganized with only ten members. They had built up their finances and had contributed generously to a new building and other improvements
.
At this time (1930’s) a local resident had dug a basement on his land in Wells, Kansas and planned to build a house over it. Finances being short, he sold the lot to the Spiritualists. The basement was enlarged and with the help of the men in the community, rock was hauled from surrounding pastures, to lay up the basement walls. Cooking for the men was done on a wood range in one of the cabins, which were moved from the Delphos Camp. These cabins are still being used. The basement has served as the dinning room all these years. Gene Copeman later purchased the lots west of the original church property and gave them to the church.

A large tent was used for services for two years after the camp was moved to Wells. The first church building was built in 1937.

In 1941 the church building burned, but was rebuilt in time for services the next year. Many old timers spent much hard work through the years to keep the camp going.
The 100th anniversary of Spiritualism was celebrated in London, England in 1949. Rev. Billy Hill was a delegate from the National Spiritualist Association to the centennial. Rev. Hill first served the church when he was 19 years old. The headquarters for International General Assembly of Spiritualist is Norfolk VA.

The big snows of 1960 proved disastrous to the church building. The weight of the snow on the roof, caused it to collapse. Once again the building was rebuilt and was completed in time for services the last two weeks of camp in 1961.

In 1963, Rev. Russell Shonts from Oklahoma City, Oklahoma, visited the church for the first time. Upon his arrival, he envisioned the church building being completed over the basement dining room. After consulting the board, the idea was then presented to the members at the August membership meeting. In October Rev. Shonts presented an estimated cost and also the architects drawing of what the new building would look like. At this point the board and membership felt they were dreaming. It seemed unbelievable that a man could be so generous with his time and labor, to help build a church so far from his home. We learned later that he had helped to start many missions. This was what he enjoyed doing most.

A building committee was appointed. A drive was then started to raise the needed funds to start the building. June 1964, the activity started by tearing off the wooden sides and roof over the dining room. The block walls went up and the new roof went on. Several contributed to a special fund, so that the church might have stained glass windows. These were installed and a suspended ceiling put in before work stopped. June 1965, work was started again.

The early fall found several families out gathering loads of rock to be used as facing over the block walls. The rock gathering proved to be fun as well as hard on backs. The many unusual rocks that cover the basement walls and those that can be seen on the church grounds, have long been admired by people from all over the United States. Therefore the members felt if possible they wanted to continue with the native rock. Clarence Whitley found a rock about three feet long and 18 inches wide, which was smooth except for a small oval in it. Inside the oval was a cross. The whole rock could not be taken from the ground, but the portion which contained the cross was broken away. This was set directly above the entrance to the church. In November the stone masons began work putting the rock facing on. Mr. and Mrs. Cy Strong of Boise City, Oklahoma offered some stone from one of the quarries on their ranch, to be used in a design on the front of the church. This stone was set into a diamond shape, which also serves as a reminder that this year marks the 75th year since the amended charter was issued.

July 24, 1966 was the highlight of their dream when the corner stone was set and the dedication held.

About the Author: Webminister

This site uses Akismet to reduce spam. Learn how your comment data is processed.